1. It is good to hear from those who have been able to “get to a peaceful state of mind” by reading posts at this site. This is nothing but early stages of Nibbāna or “niveema” or “cooling down”, and is also called the “nirāmisa sukha“. That is a characteristic of “pure Dhamma” and I cannot take any credit for it. This post explains how it happens.

2. Our minds are under stress constantly due to its tendency to know everything that is going on not only at the physical vicinity, but also things that happened in the past or one’s hopes for the future.

3. However, there is a big difference in reading (or listening to) true Buddha Dhamma. This is, of course, something one can verify for oneself (as many have).

4. This is the samādhi (or feeling of well-being) one feels when reading (or listening) to true Dhamma. It is also called the early stages of “nirāmisa sukha“; see the chart, “Nirāmisa Sukha – In a Chart“. It can be printed for reference while reading this post. 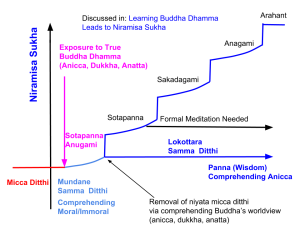 6. During the time of the Buddha, many people attained the Sōtapanna stage during the first discourse they listened to. Attaining higher stages of Nibbāna could take more formal meditation by cultivating the basics that one has just grasped.

7. Whenever one becomes restless (the uddhacca kukkucca hindrance becoming strong) and get the urge to “go watch a movie” or “stop by a friend’s house”, one could try reading (listening to) Dhamma. Similarly, if one gets bored and lethargic (tina middha hindrance becoming strong), try the same; ditto for when one is struggling to figure out “how to proceed on a key decision” due to the vicikicca hindrance.

8. Even though learning Dhamma, in general, will lead to the above-discussed effects, comprehending anicca, dukkha, anatta WILL make a big difference. However, that may take more reading and comprehension of the wider world view of the Buddha: how kamma operates, 31 realms of existence, the rebirth process, Paṭicca samuppāda, etc.

9. Even though it may not seem to be a “big deal”, understanding anicca (or cultivating the anicca saññā) will make a huge change in one’s progress, after one gains some understanding of the basic concepts like rebirth and kamma.

Next, “How to Taste Nibbāna“,…