1. Many people consider the recital of namaskaraya followed by the 24 supreme qualities of the Buddha, Dhamma, Saṅgha (Tiratana vandanä or Tisarana vandanä) in three possible ways: (i) recite them mechanically (and erroneously),  (ii) disregard them as unimportant, or (iii) even consider the practice as “mythical” per benefits of their recital.

2. As I have discussed in many posts, there are many things in this world that we do not really understand. Many of the Buddhist practices have become “mystical” simply because their true interpretations as well as their correct usage have been lost. This current topic is a good example. One can reap many benefits by understanding the true meanings of these phrases AND by reciting them correctly. I have experienced these benefits.

3. First of all, we all have seen how it is possible to convey a given message by just changing the tone. The words, “come here” can give different meanings based on the way how the words are uttered. When a parent says, “come here” to a child with love and affection, the child would be delighted to oblige. The same parent can get angry at the same child and yell, “COME HERE!”, the child i likely to cringe and back out afraid of a possible spanking.

4. Many Pāli words have a different kind of power too; certain words can influence the mind strongly. As we will discuss in future posts, the early humans had a single language called Magadhi from which Pāli words originated. It was a universal language with the effects conveyed by the way the words were pronounced.

6. These may sound like myths, but when one learns Abhidhamma and understands the power of a “somanassa sahagata citta”, (or a “thought with joy”), one could make the connection. We all, including animals who had been humans at some point in the past, have accumulated good kamma seeds as well as bad ones from the past.

7. Now we can come back to the issue of “gati sound” that we mentioned in #5 above. Tisarana vandanä especially has the power to change one’s mindset, if recited correctly.

8. Another related property is “gati ruva” or “gati picture”. The obvious example is a picture of a Buddha, not the distorted laughing Buddha, but the serene Buddhas like shown below. 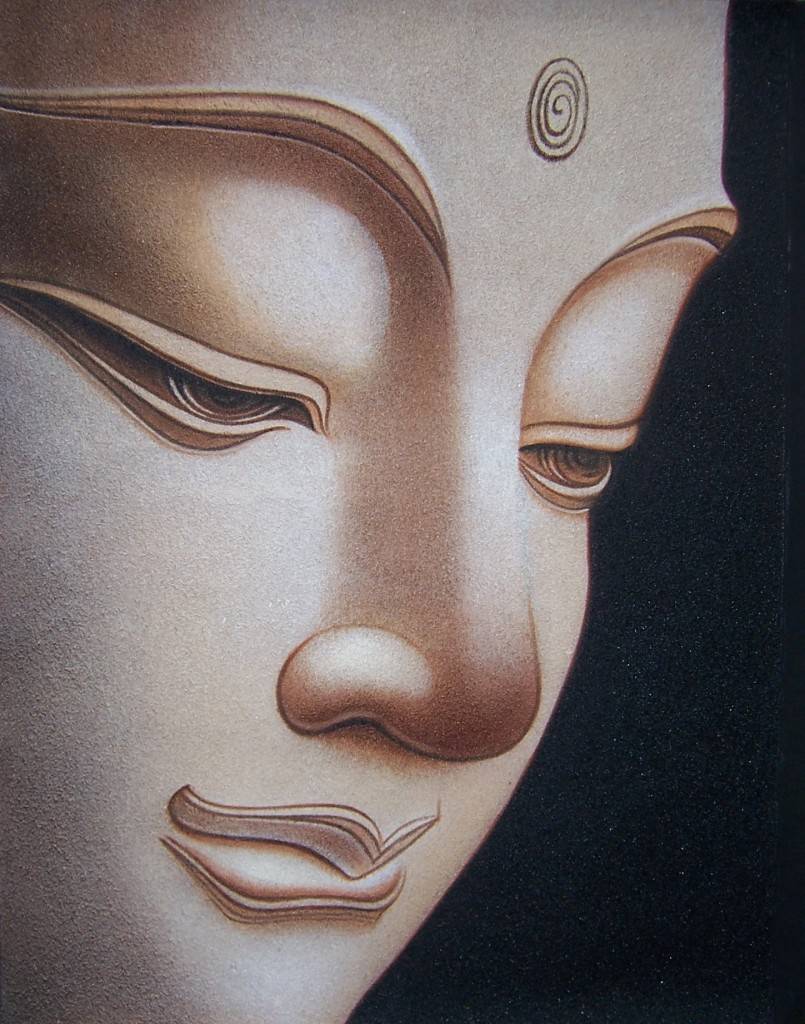 9. In order to establish this point we can think about a “party atmosphere” compared to a “meditation atmosphere”. When someone organizes a party or a dance, one decorates the room with bright colors, eye catching pictures, sensual fragrances, loud music, etc. That is the environment with “matching gati” for such an event. That would be a disastrous setting for a meditation session; one would not be able to concentrate at all.

10. This concept actually works at a deeper level too. We emit electromagnetic radiation (cittaja rupa) according out gati and mindset at a given moment. Whatever the types of Dhamma that are attracted at any given time are compatible with that state of the mind. A deeper discussion is at “What are Dhamma? – A Deeper Analysis“.

11. When one is reciting Tisarana vandanä correctly in a suitable environment, one’s gati will change at least during that short time for the better. One will be able to grasp deeper concepts during  meditation following the recitation. When one does this over a long time, one’s salient gati will gradually change too.

12. For those who may be trying to cultivate the anicca sanna (i.e., comprehend what is meant by anicca, dukkha, anatta), reciting Namasakaraya followed by Tisarana vandanä could be helpful. I am providing the recordings below.

Here is a recital of the Namaskaraya by the Venerable Thero (you need to adjust volume control on your computer). It is normally recited three times:

You can use the “DOWNLOAD” button to open the file. You can play it there or right-click on the screen and choose “save as..” to save to your computer.

Here is a recording of the Tisarana vandana by the Venerable Thero (You need to control the volume level on your computer):

More audio files are at: “Sutta Chanting (with Pāli Text)“.