Upādāna Is a Key Concept That Has Been Hidden

1. The Buddha declared that his Dhamma or teachings on suffering “had not been known to the world” before him. In his first discourse, “Dhammacakkappavattana Sutta (SN 56.11),” he “defined” dukkha or suffering.

Translated: Bhikkhus, What is the Noble Truth of Suffering?

The “Hard-To-See” Suffering That Is Hidden

2. What is “previously unheard” is that craving (icchā) for sensory attractions leads to suffering in the future. When one craves something, one will start thinking and speaking (vaci saṅkhāra) and doing things (with kāya saṅkhāra) to “get possession” of it. That “pulling close” of “mind-pleasing things” is “upādāna” (“upa” + “ādana” as we discussed before.)

3. As we will discuss, we are no different than a fish biting into a tasty bait, say, a worm. That fish does not see the hook hidden in the “delicious worm.” It will be subjected to much suffering once it bites the worm and the hook attaches to its mouth. 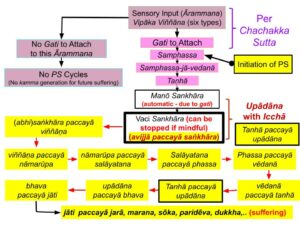 Open pdf for viewing or printing: “Icchā to Upādāna to Suffering.”

5. Idappaccayātā Paṭicca Samuppāda explains phenomena occurring in real-time as they happen. That is easier to interpret compared to uppatti Paṭicca Samuppāda, which describes events leading to future lives, especially in rebirths.

A person is in the waiting room to see a doctor and sees that someone has dropped a wallet. The moment he sees the wallet, his mind attaches to it (taṇhā). Then he thinks there could be some money in the wallet and that it is an easy way to get some “free money.” That happens within moments of him seeing the wallet.

6. Therefore, the “taṇhā paccayā upādāna” step now leads to the start of a brand new PS process with “avijjā paccayā saṅkhāra” (see the chart above.) We discussed that in the previous post, “Mōha/Avijjā and Vipāka Viññāṇa/Kamma Viññāṇa.“

7. His mind is now back to the “taṇhā paccayā upādāna” step in the PS process, and it reinforces that upādāna. The above steps may be repeated many times in his mind as he sits there and contemplates various aspects. Those, by the way, are vitakka/vicāra.

The Process Is Over, but the Consequences Will Prevail

8. It is possible that there was a video camera in the room. If so, he could be charged with theft a few days later. Those are part of the “mass of suffering” due to the immoral act of stealing.

Dhammā Are Energies Created by Mind – With Kamma Viññāṇa

9. Dhammā are the underlying energies (or “kamma seeds” or “kamma bīja“) created by the mind.

Icchā (Cravings) Lead to Upādāna and to Eventual Suffering

10. What we discussed above is the key message embedded in the First Noble Truth of Dukkha Sacca (pronounced “sachcha.”)

11. The “Icchā Sutta (SN 1.69)” summarizes the importance of the icchā. One time, a deva came to the Buddha and asked:

12. The following posts discuss more examples that may help solidify the understanding: “How Do Sense Faculties Become Internal Āyatana?” and “Key Steps of Kammic Energy Accumulation.”