Introduction – Cloning of Dolly the Sheep

1. Cloning of various types of animals has become common since Dolly was cloned in 1996.  Three sheep contributed to the birth of Dolly. One provided the egg, another the DNA (donor), and a third (surrogate mother) carried the cloned embryo to term.

What Happens in a Normal Conception?

2. But, first, we need to look at what happens in a “normal conception” where an egg and a sperm combine to form the unique cell called a zygote. This was explained in the post, “Buddhist Explanations of Conception, Abortion, and Contraception“. Here, we will first extend that discussion.

An Egg Is Unique

3. Eggs are the most remarkable of cells. They can give rise to a completely new individual within a matter of days or weeks in some animals. No other cell in a higher animal has this ability. Egg cells also contain many mitochondria which supply the energy required for cell replication and division.

Activation of the Egg by the Presence of 46 Chromosomes

4. Now, to the second factor. Most cells in a body have 23 pairs of chromosomes, for a total of 46. The egg and sperm are different. Each egg and each sperm has only one set of 23 chromosomes, not a pair. 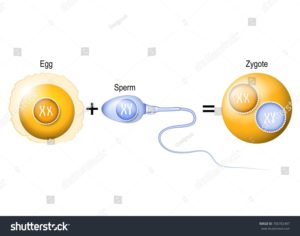 Science Cannot Explain Why Some Zygotes Are “Duds”

5. When the above process is complete, the egg becomes a zygote. At this point, the cell division is supposed to activate. However, some zygotes do not activate and thus do not lead to a fetus or a baby.

It Is a Gandhabba That “Activates” the Zygote!

6. The only difference in Buddha Dhamma is that the cell division starts ONLY IF (and when) a gandhabba descends to the womb and merges with that zygote.

7. Without the “mental component” or the gandhabba, there is no life! A zygote is an inert cell and has no “sentient life”. The zygote that results from the merger of the egg and the sperm is just the “material base” and not a “new life”.

The Procedure of Cloning Versus Natural Conception

8. The zygote formation is different in cloning compared to the natural conception. In the case of cloning, a sperm from a father is not involved.

9. However, it seems that is not enough to initiate the cell division. An electric shock is required to activate the process (i.e., to initiate cell division of this artificially created zygote.) This is the second difference compared to the natural process.

A Gandhabba Is Still Needed in Cloning

10. Even though that is the whole picture according to science, Buddha Dhamma says, there MUST be a gandhabba merging with that cell in order to “give it life”.

Genetic Material Is From One Cell in Cloning

11. The main thing from the above figure in #8 on cloning for our discussion is that the yellow cell is the egg from the mother. The other cell on the top is from the “donor.” It is not sperm but any kind of cell. No sperm is in the picture. Instead of half the genetic material coming from sperm and half from an egg, it all comes from a single cell.

12. Now, in the case of cloning, the following should be clear, according to science:

No “Monsters” Will be Created With Cloning

13. Studies done over the past 20 years with different types of animals show that:

14. That is pretty much the picture in Buddha Dhamma too, but with the following exceptions:

15. The word “clone” is defined as, “an organism or cell produced asexually from one ancestor or stock, to which they are genetically identical.”

16. The main point from Buddha Dhamma is that a new life cannot be created by any means, whether in a laboratory or anywhere in the universe. This is the only inconsistency with science here, and it is a major inconsistency.

16. So, I hope it is clear that cloning itself is consistent with Buddha Dhamma, and specifically with the concept of gandhabba.