The brain is Not the Mind

1. Contrary to what scientists believe, our minds are not in the brain (this is another prediction from Buddha Dhamma that will be proven correct in the future).

2. A physical body is a temporary shelter or a “shell” for the gandhabba‘s subtle body. The gandhabba receives sense inputs from the outside world via the physical body. See, “Body Types in Different Realms – Importance of Manomaya Kaya,”

3. Before entering the mother’s womb, the gandhabba has a very fine “body,” more like an “energy packet.” Thus, it cannot experience taste or touch, even though some can “digest odors” and become a bit denser.

Brain – Interface Between the Physical Body and Gandhabba

4. Once inside a physical body, gandhabba has to use the physical body to interact with the outside world. It is like being trapped in a solid shell. Initially, its mind will be in the bhavaṅga state (see, “Citta Vithi – Processing of Sense Inputs“) and will not be conscious about its environment, except for body sensations.

5. It is the brain that acts as the intermediary between those physical sense inputs and the five pasāda rupa. It processes the incoming information to a form that can be understood by the mind (hadaya vatthu). 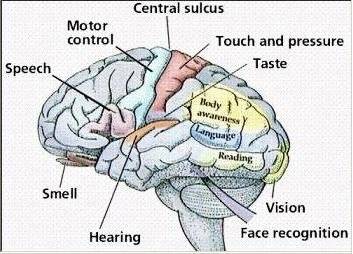 6. The signals for vision, sounds, smells, and taste come into the body through specific body parts. In contrast, the touch sensations can come from anywhere in the body, and conveyed via an intricate system of nerves: 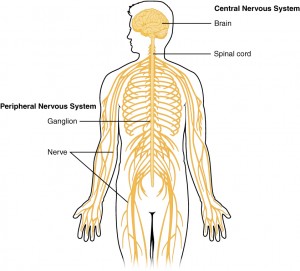 7. By the way, it is essential to note that the misty gandhabba has a similar “nervous system” that overlaps the physical nervous system shown above. Yes. that is extremely fine, more like an “energy field”. That is not entirely relevant to the present discussion, but the physical body is there to impart kamma vipāka via body aches, diseases, and injuries.

8. The signals from the other four senses go to specific brain areas (indicated in the figure in #5 above) via specialized neural pathways. For example, the optical nerve carries the visual signal to the brain:

Mana Indriya in the Brain

9. So far, we have identified five of gandhabba‘s “windows to the outside world” from his/her “shell” or the physical body: eyes, ears, nose, tongue, and the body.

10. So, how do the signals processed in the brain due to incoming vision, sound, smell, taste, touch, and dhamma are passed to the five pasāda rupa and the hadaya vatthu? Details in “Gandhabba (Manomaya Kaya)- Introduction.”

The Origin of Citta Vithi

11. When information comes to one of the five pasāda rupa, it passes on that signal to the hadaya vatthu by impinging (hitting) the hadaya vatthu. That results in the hadaya vatthu vibrating 17 times, just like a clamped blade vibrates a certain number of times when hit by an object; see, “Gandhabba (Manomaya Kaya)- Introduction” and “Citta Vithi – Processing of Sense Inputs.”

13. Therefore, this whole process involves interaction between two overlapping systems. The physical body and the corresponding subtle “energy body” of the gandhabba.

14. Thus it is clear that the brain plays a significant role in shaping our future. Similarly, the five physical senses play vital roles too.

Next Existence Determined by Gati and Kamma Vipaka

15. It does not matter whether one gets killed due to an accident or dies due to an illness or old age. The gandhabba‘s future is determined by his/her gati (or gati), past kamma (kamma bija), etc.

16. It is also clear why we need to take good care of the body, our sense faculties, and of course, our brains. gandhabba‘s (our) ability to make decisions depends on all those faculties working in optimum condition.

17. Some scientists/philosophers are beginning to understand that memories are not stored in the brain. See, “The Empty Brain.”

Thanks to reader Diogo Roberto R. Freitas for alerting me to the above article.