Summary of Discussion Up To Now

2. Then, one MAY “attach to” or “get stuck in” that sensory experience INSTANTLY. That means generating taṇhā. Then the “taṇhā paccayā upādāna” step automatically follows. That is a step in the middle of the Paṭicca Samuppāda (PS) cycle.

3. Since it is CRITICAL to understand what we discussed above, I have made the charts below to help us with the discussion. 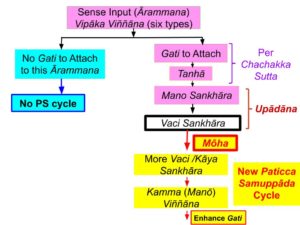 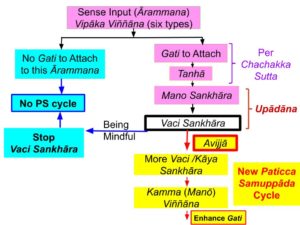 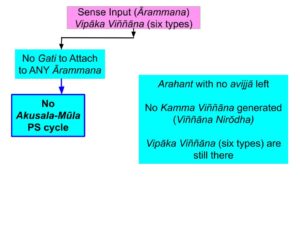 Difference Between Mōha and Avijjā

4. Let us start with the chart on the left. That chart is for an extreme case of a “totally morally-blind” person. That mind is covered with defilements (mōha.) Just like an animal, such a person would go along with any temptation that comes to mind. His/her “bad gati” will only get stronger.

5. Above charts also help us clarify the difference between vipāka viññāṇa and kamma viññāṇa. Any sensory EXPERIENCE is a vipāka viññāṇa. Vipāka viññāṇa can come in through any of the six sense faculties, as shown at the top of the charts. Every living being, including an Arahant, experiences vipāka viññāṇa. In other words, ANY sentient being can see, hear, etc.

6. From the last bullet of #5, it is clear that one’s mind will NOT go through the Akusala-Mūla PS at ANY TIME, only if one is an Arahant.

7. As we summarized in #5 above (and discussed in the post mentioned there), attachment to a ārammana happens instantly. That requires no conscious thinking and thus is NOT possible to stop. As long as one has “bad gati,” one MAY attach to some sensory inputs (ārammana.)

8. Therefore, until one becomes an Arahant, a sense of “self” will decide how to respond to sensory input based on some attachment to “this world.” As shown in the middle chart above, anyone can stop any “bad vaci saṅkhāra” that arises when tempted by a given sensory input. If that fails, one can stop kāya saṅkhāra, which leads to physical actions. Simply put, one should stop immoral conscious thoughts, speech, or deeds as soon as one becomes aware of them.

9. What is the real difference between a vipāka viññāṇa and a kamma viññāṇa?

10. Those “expectations” in kamma viññāṇa are energies generated by the mind in javana citta. They stay “out there in the world” as dhammā. Those are part of the dhammā in “manañca paṭicca dhammē ca uppajjāti manō viññāṇaṃ.”

All posts on the new series at “Origin of Life.”