1. We see that there are three major “bhava” or existence corresponding to the three major levels of existence that the 31 realms can be divided into kāma bhava, rūpa bhava, and arūpa bhava.

2. The following chart shows the division of the 11 kāma lōka realms into the four apāyās, the human realm, and six deva realms. 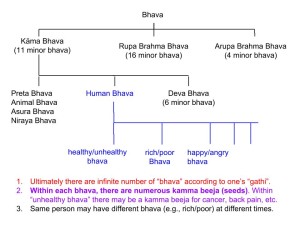 Click to open and print the above chart: “Bhava, Gathi, Kamma Beeja Chart.”

4. When we are unable to satisfy some sense desires, we as humans tend to do immoral things to fulfill such sense desires; these are the apunnābhisaṅkhāra associated with strong “kamma patha” that will generate “bad kamma bīja” to bring about bad consequences or vipāka that could lead to rebirth in the lowest four realms of kāma lōka; see the previous post, “Namagotta, Bhava, Kamma Bīja, and Mano Loka (Mind Plane).”

6. If you think about it for a minute, you will realize that most of the abhisaṅkhāra that we do, are done targeting one or more of those sense-pleasing activities (and they are normally not even immoral, i.e., but they are still apunnābhisaṅkhāra, but with less kammic energy).  But these do not lead to births in the apāyās.

7. On the other hand, some people get dissatisfied with the sensory pleasures and cultivate jhānās to enjoy “mind pleasures” either in the rūpa lōka or arūpa lōka.

8. Thus, “bhava” is an energy that we build up ourselves through our actions. Even if someone does not like to be born a dog, if one keeps doing things normally done by dogs, then one is preparing bhava to be born in the “dog bhava.”

9. One thing that should have become clear is that even if we do not do any immoral deeds, we are bound to be reborn in the kāma lōka (sense realms of the four apāyās and the human and Deva realms) as long as we crave sense pleasures. But such sensual cravings, by themselves, do not lead to birth in the apāyās; birth in the apāyās is due to apunnābhisaṅkhāra or immoral saṅkhāra (see #5 above).

10. The mundane way to escape from the kāma lōka is to cultivate anariya jhānās (either rūpa jhānās or arūpa jhānās) and seek rebirth in rūpa or arūpa lōka. But the problem is even then, we will not be “really free” from rebirth in the kāma lōka in the future. This is because after the kammic energy of that rūpa bhava or arūpa bhava is worn out, that anariya person will be reborn in kāma lōka again.

11. Generally, as we have referred to before, “bhava” means existence somewhere in “this world.” It is even better to say that “bhava” means the “potential for existence” somewhere “in this world of 31 realms”.

12. Similarly, another person practicing arūpa jhānās will be cultivating a kamma bīja in “arūpa lōka bhava.” Furthermore, he/she is likely to display qualities or “gati” of an “arūpa Brahma” even while leading a human life.

13. The strength of a kamma bīja comes from the javana of the citta while one is engaging in the activity. The worst consequences and strong kamma bīja are generated by a mind that enjoys the evil act. This is why the “sōmanassa sahagata diṭṭhi sampayutta citta” or the “thought (act) done with pleasure and with wrong views that arises automatically” is the strongest immoral citta.  Such a thought arises automatically when one has “gati” compatible with such acts.

14. To break away from bad gati, one needs to decide not only to stop such bad activities but also to build up the opposite good gati and start heading in the right direction. We must follow the mundane Eightfold and Noble Eightfold Path in that sequence; see “Buddha Dhamma – In a Chart.”

15. Also, it is impossible to grasp all this with a mind that is not purified. As I emphasized many times, what matters in making progress is not the “book knowledge” but cleansing the mind and grasping the key Dhamma concepts.

16. Some people worry about whether they can get rid of certain bad habits they have. They just try to suppress them quickly by sheer willpower. That does not work most of the time. One has to be patient and follow the Path while learning and grasping the key Dhamma concepts.

17. In the previous post, “Namagotta, Bhava, Kamma Bīja, and Mano Loka (Mind Plane),” we discussed how both nama gotta, and kamma bīja (and bhava) are “located” in the mind plane. Nama gotta are just records without any embedded energy; when one thinks, speaks, and bodily acts, a trace of those thoughts, speech, and actions are recorded (like a tape) in the mind plane.