1. Kanha (dark), sukka (bright), and kammakkhayāya kamma are important terms discussed briefly in the Kukkuravatika sutta (in the niddesa version). In this post, we will clarify these terms before discussing that sutta in the second post published today, “Kukkuravatika Sutta (Majjhima Nikāya 57) – Kammakkhaya“. June 19, 2018:  Siebe has sent me more suttā from Anguttara Nikāya that discusses these terms: AN 4.232- AN 4.238. Thanks, Siebe!

2. The term kammakkhayāya kamma means the same as kusala kamma.

3. With a kamma done, its energy will be there for a long time until naturally worn out. But one can REMOVE the CONDITIONS under which that kamma can bring its vipāka. That is what is meant by “kammakkhaya.”

4. One’s mind is where various kamma bīja germinate. It is fair to say that ANY average human will have many kamma bīja suitable to bring rebirth in the apāyā from previous lives, if not from this life. But just having such kamma bījā does not necessarily mean they will bring vipāka. 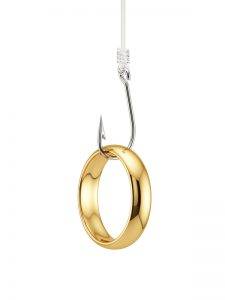 Let me take a different analogy to see why a purified mind will not grasp kamma bīja. Visualize the mind being a ball with a hook attached to it. The size of the hook is proportional to how corrupt or defiled the mind is.

And we can think about kamma bīja as rings of various sizes: rings of a wide variety of sizes ranging from very tiny to large (representing small to large kamma bīja that can bring kamma vipāka).

5. Imagine a highly-defiled mind (i.e., with a large hook attached to it.) Also, imagine an area with many kamma bīja of various magnitudes (many rings of different sizes).

6. What happens when one follows the Noble Path of the Buddha is that one’s “mental hook” will get smaller in size, in this analogy. That means growing paññā.

7. Even before reaching the Sōtapanna Anugāmi stage, one’s mental hook may keep decreasing size, but not that significantly. Of course, the kamma bīja or rings will remain almost the same.

8. As one goes through the Sakadāgāmi, and Anāgāmi stages, the mental hook will shrink in size. At the Arahant phala stage, the hook will disappear with avijjā wholly removed, and paññā (wisdom) peaked.

9. Kammakkhayāya kamma (or kamma that lead to kammakkhaya) or kusala kamma do not directly remove existing kamma bīja. They lead to a state of mind where existing kamma bīja are UNABLE to bring vipāka. That is a VERY IMPORTANT point to understand. Please come back and read this post as many times as needed to comprehend this point (and ask questions at the discussion forum).

11.  Now, let us look at the meanings of puñña and pāpa kamma. To clarify what puñña (sukka) kamma and pāpa (kanha) kamma are, we need to understand how births in various realms arise.

12. Now, puñña (sukka) kamma generate “good kamma beeja” that can give rise to rebirths in the good realms (at and above the human realm). They also can bring “good vipāka” during a lifetime.