As of August 2022, there are over 700 posts on the website. Recently, I have been getting inquiries on “where to start?” when one first comes to the website.

1. First, there are a few general tools that can be used to navigate the website: 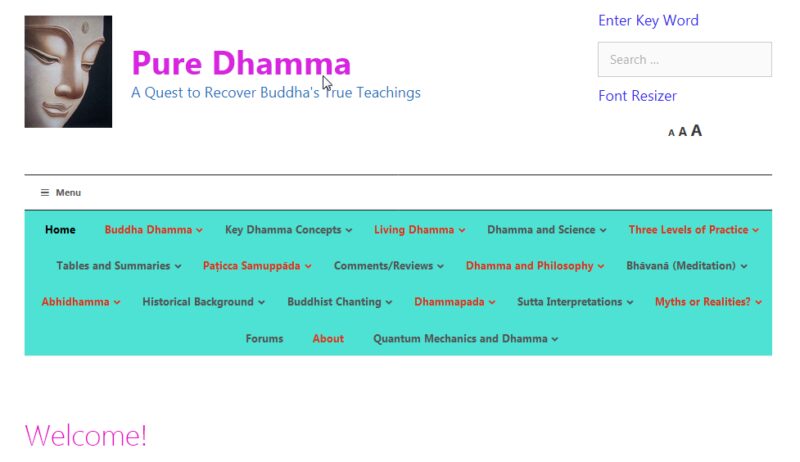 2. First, for those familiar with Buddha Dhamma (Buddhism), I like to point out that three main misconceptions are prevalent today. They not only block the path to Nibbāna but are micchā diṭṭhi that could be responsible for rebirth in the apāyā. I am not trying to scare anyone, but “making adhamma to be dhamma is a serious offense.”

3. Now, let us discuss which sections could interest people with different backgrounds on their exposure to Buddha Dhamma.

4. The “Buddha Dhamma” section is a more advanced version of the abovementioned sections. It discusses the basis of the Buddha Dhamma, i.e., the importance of purifying one’s mind in the first few posts.

5. For Those who have had exposure mainly to “Mahāyāna Buddhism,” the following two posts will provide an idea of why Mahāyāna sutrās are very different from the suttā that the Buddha delivered: “Saddharma Pundarika Sutra (Lotus Sutra) – A Focused Analysis” and “What is Sunyata or Sunnata (Emptiness)?“.

6. Even Theravāda Buddhism — which is supposed to be closest to the Buddha’s original teachings — has been contaminated over the years, mainly due to three key reasons. The first reason is losing the true interpretations of ten types of micchā diṭṭhi (wrong views).

8. Third and most important reason is the incorrect translation of key Pāli words like anicca and anatta by the Early European scholars in the 1800s, see “Misinterpretation of Anicca and Anatta by Early European Scholars.”

9. Many people don’t realize that the concept of gandhabba (mental body) is a critical component in explaining how life functions in human and animal realms.

11. The critical problem of incorrect translation of anicca and anatta has prevented so many people from making progress over the past 200 years. I strongly recommend the post “Anicca, Dukkha, Anatta – Wrong Interpretations. “

12. Now, let us turn to an issue of relevance to many new to Buddha Dhamma. Many people — especially in Western countries — have a hard time believing in rebirth; see, “Buddhism without Rebirth and Nibbāna?“.

13. Once one starts looking into Buddha Dhamma seriously, it is a good idea to learn a few basic things about the Pāli language. The Pāli Canon, first transmitted orally and then written 2000 years ago, still has all the suttā composed by the Buddha and memorized by Ven. Ananda.

14. Learning the correct meanings of the suttā in the Tipiṭaka is essential to learning Buddha Dhamma. Most existing literature, even on Theravāda, has incorrect translations.

15. Meditation (both formal and informal) is essential to following the Path of the Buddha. The “Bhāvanā (Meditation)” provides a series of posts on the fundamentals of meditation and also on advanced topics.

17. Chanting of suttā and reciting the virtues of Buddha, Dhamma, and Saṅgha can prepare one’s mind to be receptive to learning Dhamma and thus could be an important part of the practice, see “Buddhist Chanting.”

18. For Those who would like to see how compatible Buddha Dhamma is with modern science, the “Dhamma and Science” section is a good resource.

19. The section on “Tables and Summaries” is an important collection of posts summarizing bits of information or “data” that are not necessary to be memorized but could be needed to explain things in detail.

20. Some either have already learned Abhidhamma or would like to learn. For them, the “Abhidhamma” section could be useful. There are several subsections in this section on various topics.

21. Finally, but most importantly, three important subsections discuss issues involved in attaining magga phala (stages of Nibbāna). The primary goal of this website is to provide enough material for one to attain the Sōtāpanna stage of Nibbāna.