1. There are many posts on the critical concept of gandhabba not only in this series, but scattered throughout the site, and especially in the section, “Gandhabba (Manomaya Kaya).” These posts discuss the details on how a living being goes through the rebirth process without having an unchanging “soul.” But they maintain (ever-changing) personal characteristics or gati (pronounced “gati”) between two adjacent lives.

This World Has Thirty-One Realms of Existence

2. We will first review two significant aspects of the 31 realms. Then we will discuss the concept of a gandhabba (which applies only to human and animal realms) in more detail.

Death of Physical Body Different From the  End of an Existence

3. The following chart shows the major features of what happens at the cuti-patisandhi moment. That is when a living being makes a transition from one bhava (existence) to another, say from being a human to a Brahma. 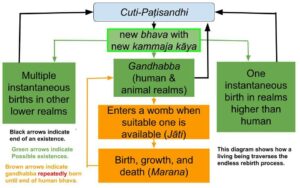 Click to open the pdf file: Births in Different Realms

Types of “Bodies” In Different Realms

4. Thus it is essential to realize that the critical thing that happens at the cuti-patisandhi moment is the generation of the unbelievably small kammaja kāya, which contains the blueprint for the new existence. At that point, the mechanism of “birth” can be roughly divided into three categories, as shown in the chart.

5. What happens in the green box to the left is a bit more complicated. That is because each realm in the apāyā (lowest four realms) is somewhat different. We will discuss the animal realm together with the human realm (middlebox) below. Let us first discuss briefly the lowest three realms indicated by the green box on the left.

6. That brings us to the middle green box, which represents the human and animal realms. A little bit more complicated process takes place here. Here also, a being with a subtle (energy) body is produced at the cuti-patisandhi moment, just like in the rupa lōka realms. It is called a gandhabba.

7. One of the main benefits of learning about the gandhabba is in helping remove the wrong view that “I am my physical body.”

Brahma “Bodies” Have Only a Trace of Matter

8. As we mentioned in #4 above, most lifeforms in the 31 realms have unbelievably tiny physical bodies. They are more like “energy bodies.” Any individual being in the 16 rupa lōka realms and the four arupa lōka realms weighs less than a billionth of an atom! They may be thought more as energy packets.

The desire for a Dense Human Body

11. But this gandhabba is continuously under stress because it is unable to enjoy the most coveted sense pleasures of those with dense human bodies, i.e., eating and sex. It can see people enjoying these sense pleasures and is very much frustrated not being able to acquire a “real physical body.” Some can stay in this state for many, many years if a suitable womb does not become available.

12. The story of the gandhabba gets more interesting (and complicated) after it goes through the first birth as an average human and dying. The gandhabba that comes out of that dead body is, of course, different from the original gandhabba. Its kammaja kāya has changed due to whatever abhisaṅkhāra that the human cultivated. But the kammic energy for the human bhava does not change; if it had 1000 years worth of kammic energy at the cuti-patisandhi moment, that would deplete with time.

13. Let us consider some important features of this gandhabba that comes out of that dead body after its birth as a human.

14. Since the cittaja kāya also continues, their thought streams continue. So, if someone dies in an accident, he may not realize that he is dead for a little while. If he died from a gunshot instantly, the gandhabba comes out of and will be looking at the dead body trying to figure out what happened. He may wish to go home and finds himself instantly at home. And he will try to shout to others, but of course, they don’t hear. He may try to touch them, but he cannot. It takes seven days for a gandhabba to comprehend what happened entirely and to resign to his/her new life.