1. Our “human world” is made of two types of worlds:

2. Those two worlds co-exist. It is just that we cannot “directly experience” the immaterial (invisible) world or the nāma lōka.

3. Dhammā are what we perceive with the mind with the help of the mana indriya in the brain. They include our memories including those from past lives. Only those with iddhi (super-normal) powers can recall memories from past lives. However, some children can remember past lives; see, “Evidence for Rebirth.”

Rūpa Can be Dense or Fine (Subtle)

4. Rūpa in Buddha Dhamma cannot be translated into English as “matter” or “solid objects.” As we discussed above, our minds can make very fine rūpa called dhammā, and can also detect those dhammā that are in the immaterial world.

5. The five physical senses detect “dense” rūpā that are in the material world. Such dense rūpā are ABOVE the smallest “unit of matter” in Buddha Dhamma, called suddhāṭṭhaka. (A suddhāṭṭhaka is a billion times smaller than an atom in present-day science). The 28 types of rūpa consist of these “dense types of rūpa“; see, “Rūpa (Material Form).” 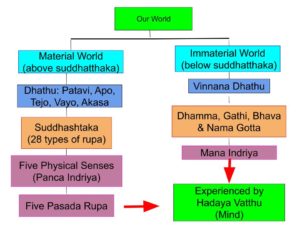 Click to open in pdf format: Two Types of Loka

7. Let us briefly discuss the main points depicted in the above chart. Everything in this world is made of 6 dhātu: patavi, apo, tejo, vayo, akāsa, and viññāna. Five of them constitute the “material world” and the viññāna dhātu represents the “immaterial world”.

8. We have five sense faculties to experience the material world: eyes, ears, tongue, nose, and the body. They pass down the sensory inputs to the five pasada rūpa located in the gandhabba or the manōmaya kāya, that overlaps our physical body); see, “Gandhabba (Manomaya Kaya)“. By the way, gandhabba is not a Mahāyāna concept:  “Gandhabba State – Evidence from Tipiṭaka“.

9. Thus it is important to understand that there are two types of rūpa in our human world:

10. Another part of our immaterial world is the dream world.

11. There is another way to look at our sense experiences. Living beings are attached to this world because they expect to gain pleasure from this world. Such pleasures are obtained by making contact with rūpa. Those rūpā come at various densities.

12. The way a living being experiences and enjoys (or suffers) sense contacts is different in the three main categories of existence: kāma lōka, rūpa lōka, and arūpa lōka.

13. We can get an idea of such “soft” and “rough” sense contacts with the following example. Suppose someone (a grandmother is a good example) watching her grandchild laughing and dancing around having a good time.

14. Therefore, the level of inevitable suffering goes hand in hand with the “denseness” of the sensory contact.

15. As one attains higher stages of Nibbāna, craving for “rough” sense pleasures, as well as the desire to “own” things go down.

16. Each habitable planetary system (cakkavāla) has all 31 realms of existence, even though we can only see two realms (human and animal) in ours.

This is discussed next:  “31 Realms Associated with the Earth“, ………