Patient H.M. provided a critical clue to the role of the hippocampus in memory preservation. Studies on him and a few other patients point to direct and indirect roles played by the brain in preserving memories.  The Buddhist and scientific descriptions are the same for habitual (procedural) memory but different for autobiographical (declarative) memory.

Major Components of the Brain

1. The following diagram shows the brain divided into three regions. The following bullet points provide the KEY FUNCTIONS of each area. It is a crude description but provides a simple picture. 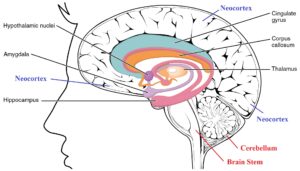 Structural Information on the Three Regions of the Brain

2. The above figure shows a brain cut in the middle. Some components of the limbic system have two parts on either side. For example, the hippocampus and amygdala have two identical structures on the brain’s left and right sides.

Overview of Our Discussion So Far

3. Now, we can better visualize our discussion so far in the previous few posts, especially the post on “Persistent Vegetative State – Buddhist View.” Let us first go over that post. 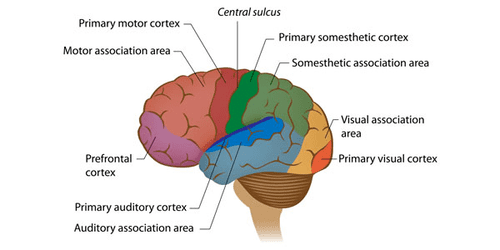 The Opposite of a “Vegetative State” – Living Without Memory

4. Now, let us discuss a few people who were unfortunate to face different problems due to a third region of the brain located close to the middle of the brain. As we can see from the first figure above, the limbic system lies underneath the neocortex and sits above the brain stem/cerebellum area.

The account of “Patient H.M.” – Critical Role of Hippocampus

5. Patient H.M. (or Henry Molaison) suffered from frequent bouts of seizures. In 1953, a surgeon removed both his hippocampi in an attempt to solve that problem. Even though the episodes went away, HM suffered a devastating memory loss.

6. We need to be aware are some standard terms used by neuroscientists. That will help us understand the content in the following videos.

7. The following video is a bit long. But it provides a lot of information.

8. The Nova clip @7 minutes says that memories are created and erased by chemical processes. But that is not consistent with either Buddha Dhamma or recent findings in science.

9. The account of a different person, patient E.P. starts at 4:30 minutes. In 1992, E.P. suffered a viral infection that seemed to have damaged parts of the limbic system. That is very similar to the case of Clive Wearing that we will discuss below.

10. Clive Wearing was a reputable musician. A herpes virus damaged his brain (around the limbic system) just over a few days in 1985. Unlike patient H.M. and patient E.P., he cannot recall ANY memories. He can remember only those events within the last seven seconds. His situation is even worse than that of the previous two patients.

11. Note in the beginning that he can play the piano but cannot remember anything that happened even several seconds ago!

12. Here are more notable things from the above video:

13. We can learn a lot about the working of the brain and the gandhabba by carefully analyzing the accounts of patient H.M., patient E.P., and Clive Wearing.

3. One could Google and find much more information on any of these topics. I have provided just enough material to get the basic idea.

All posts in this section at, “Buddha Dhamma – A Scientific Approach.”