Understanding how gati (habits/character) can be changed is the key to cultivating Ānāpānasati/Satipaṭṭhāna meditations.

2. These are specifically gati to attach to various worldly ārammaṇa and generate kamma bija that can perpetuate the rebirth process among the 31 realms.

Key Steps Recommended by the Buddha

3. The Buddha said to follow the following procedure to break a bad habit and instill a good habit:

With time, the bad habit(s) will disappear, and the good habit(s) will take hold. There comes a time when one will automatically follow this procedure; it becomes a “way of life.”

4. The reasoning behind this is based on the key factors that we discussed in the previous posts; see “The Law of Attraction, Habits, Character (Gati), and Cravings (Āsavā)” and “Habits, Goals, and Character (Gati or Gathi)“:

7. Those last two bullets highlight the basis of Ānāpānasati/Satipaṭṭhāna Bhāvanā. The following chart illustrates that. 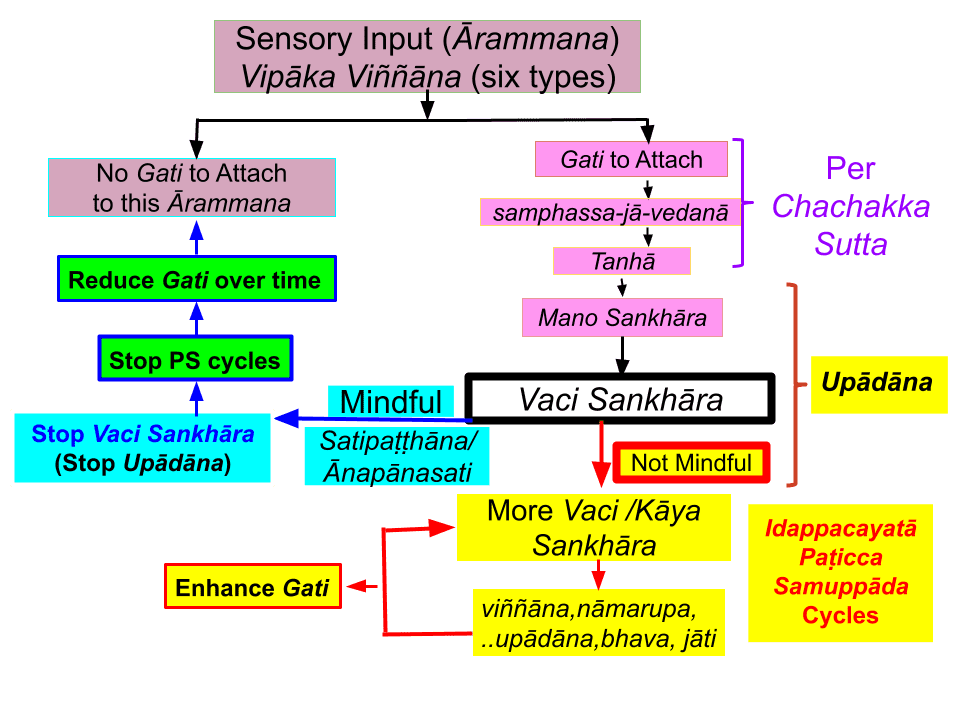 8. As we progress on “being mindful,” we will be able to “catch” immoral thoughts, speech, and action progressively earlier.

9. As long as we have gati (habits/character) to attach to various ārammaṇa, we will engage in immoral thoughts, speech, and deeds. That will perpetuate the rebirth process.

10. Beginning in the early 1990s, scientific investigations in several fields (effects of meditation on the brain, behavioral studies on animals and humans, neurology, etc.) have come to similar conclusions.

11. In science, the key is in the neurons in the brain and how we can train our neocortex to fire the right sets of neurons more frequently. The “frontal lobes” of the neocortex are the command center for brain activities.

12. Dr. Jeffrey Schwartz is a psychiatrist specializing in treating Obsessive Compulsive Disorders (OCD) and has pioneered using “habit makeovers” to treat OCD. He has written several books, but I highly recommend the two books, “The Mind and the Brain” and “You are not Your Brains.”

He has developed a “Four Step” method to change one’s habits that give rise to OCD:

13. He has kept records of his patients’ brain scans, which clearly show the improvements in the brain with time, and of course, most patients can get rid of their compulsive behavior.

14. Here is a figure from Dr. Schwartz’s book, “The Mind and the Brain”  (p. 362), that illustrates the “re-wiring” of a new network in the brain and the concomitant weakening of a network for an undesirable habit (click to open it):

15. The same principle has been used to eliminate other annoying habits and severe disorders. We can use the same procedure to stay away from immoral habits and cultivate moral habits; this is the basis of “ānapāna,” see “Key to Ānāpānasati – How to Change Character and Habits (Gati).”