1. In 1988, Dee Fletcher almost died due to carbon monoxide poisoning. Her husband found her unconscious just in time to save her life. However, when she recovered, she had lost “sight” in the normal sense of the word.

2. But soon she realized that she had some peculiar abilities. She could grab a pencil from the hand of a person who held it in front of her, even though she could not actually “see” the pencil or the person.

Since then researchers have done numerous experiments on her, which have led to some astonishing findings of how vision works.

3. Another ability of Dee was to be able to walk around the house without bumping into furniture or walls. Since that ability could be due to her familiarity with the house, they took her to an unfamiliar trail and she did not have any problem walking there without tripping over rocks or bumping into trees.

4. The following figure shows the optical nerve splitting and connecting to those two areas in the brain. 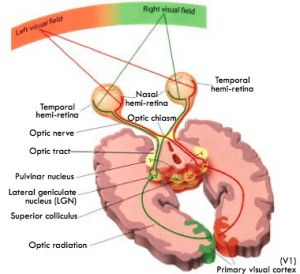 How Vision Happens- Still a Mystery for Science

6. Of course, scientists are only aware that those two areas in the brain contribute to those two functions. They do not know exactly how the visual cortex gleans information about the object (i.e., its visual characteristics.) Also, it is not known how the superior colliculus figures out the dimensions of the object and how far it is at (in order to correctly grab an item both types of information are needed).

7. There are many research papers that describe experiments involving Dee Fletcher, and the two principal researchers have written a book on this research: “Sight Unseen – An Exploration of Conscious and Unconscious Vision” by M. A. Goodale and A. D. Milner (2004).

8. The book by Goodale and Milner also describes a visual problem that is the opposite of that of Ms. Fletcher. This syndrome is called the “optic ataxia“, and those who have it can “see” and recognize objects very well, but they have difficulty in actions involving objects.

How Does the Mind Figure out the Distances to Objects Around Us?

9. Have you thought about how we can move around without bumping into each other and other objects like trees on the ground and cars on the road? The presence of the two processing streams can BEGIN TO explain how the brain figures out not only “what is in front of us (a human, tree, or a car)” but also “how far is it at and how big it is”.

10. Even though scientists have figured out that those two areas in the brain (visual cortex and the superior colliculus) somehow extract the two kinds of information, they have absolutely no idea how those areas extract that information from the chemical signal that comes through the optical nerve. 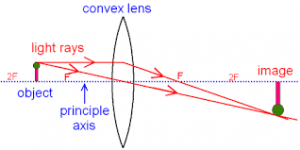 This is pretty much how a camera captures an image:

How Can a Chemical Signal Provide the Perception of Sight (and Light)?

11. Of course, the film in an old camera undergoes some chemical changes when the image falls on it. Then that film is chemically processed to reveal the picture.

12. Even within the visual cortex itself, there are 30 different areas specialized to carry out different tasks. They all help provide a “comprehensive picture” of the object.

The brain is Not a Computer – It Can Change

13. Brain is indeed a very sophisticated machine! However, as we will find out in upcoming posts, it is not a typical machine like a computer. It can change on its own!

14. We live in a truly opportune time to comprehend the value of Buddha Dhamma. Modern science provides clues that can be used with Buddha Dhamma to clarify many issues and vice versa. See, “Buddha Dhamma – A Scientific Approach” and  “Quantum Mechanics and Dhamma.”